Converse received a trademark registration on September 10, 2013, for a mark that “consists of the design of the two stripes on the midsole of the shoe, the design of the toe cap, the design of the multi-layered toe bumper featuring diamonds and line patterns, and the relative position of these elements to each other.” Converse asserted that its first use of this trademark was in 1932. Converse’s well-known shoe design is shown below: 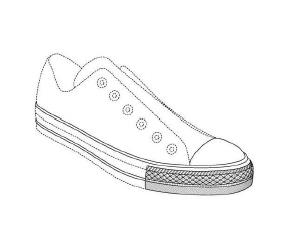 The ITC required Converse to demonstrate that its mark had acquired secondary meaning. Converse presented evidence including use of the shoe design since 1932. The ITC disagreed with the evidence, determining that both the registered and common law trademark were invalid as not having acquired secondary meaning. The ITC further concluded that if the mark had been valid, then it would be infringed.

On appeal, the Federal Circuit held that the ITC had committed a series of errors. The ITC first failed to determine the relevant date for assessing whether secondary meaning exists. The court held that “the party asserting trade-dress protection must establish that its mark had acquired secondary meaning before the first infringing use by each alleged infringer.”

The Federal Circuit also concluded that the ITC had applied the wrong legal standard in its determination of secondary meaning. The court clarified that to determine whether a mark has acquired secondary meaning, the following factors must be weighed: (1) association of the trade dress with a particular source by actual purchasers (typically measured by customer surveys); (2) length, degree, and exclusivity of use; (3) amount and manner of advertising; (4) amount of sales and number of customers; (5) intentional copying; and (6) unsolicited media coverage of the product embodying the mark. The court stated that “[a]ll six factors are to be weighed together in determining the existence of secondary meaning.” The secondary meaning analysis seeks to determine what is in the minds of consumers as of the relevant date (i.e., first infringing use), and the factors, specifically the second factor, must be applied with this purpose in view.

Having explained this standard, the Federal Circuit then remanded to consider whether Converse’s mark had acquired secondary meaning at the time of each first infringing use by each intervenor. Converse had not sought to introduce such evidence before the ITC, but the court concluded that Converse had not waived the right to do so given the clarifying nature of this opinion.

The Federal Circuit further explained what is meant by “exclusivity of use.” Drawing from the USPTO’s standard for prima facie evidence of distinctiveness—i.e., “proof of substantially exclusive and continuous use thereof as a mark by the applicant in commerce for the five years before the date on which the claim of distinctiveness is made” (15 U.S.C. § 1052(f))—the court held that the ITC should rely principally on uses within the five years preceding the relevant date. More specifically, for parties seeking to attack the validity of Converse’s registration, the ITC must examine secondary meaning within the five years prior to registration, while for Converse’s unregistered mark, this five-year period is measured from the date of the first alleged infringement.

Regarding the ITC’s determination of infringement, the Federal Circuit held that in the context of trade-dress infringement, accused products that are not substantially similar cannot infringe. The court instructed the ITC on remand to consider whether the accused products are substantially similar to the mark when undertaking the infringement analysis. In this regard, the court observed that the presence of a competing party’s brand name on the competitive product was not dispositive but was a factor that should be considered on remand. The court rejected arguments that Converse was required to have proven reputational harm and that the mark was nonfunctional.

This case provides clarity on how the Federal Circuit will analyze secondary consideration and infringement issues for product designs.

For more information on this ruling, please contact Fitch Even partner Mark W. Hetzler, author of this alert.

Hosted on the FirmWisesm Platform | Designed by Charette Design